A Little Bush, a Great Man

What is the big deal about the Burning Bush? Seriously, after all, we’re talking G-d! Couldn’t He have done something a little more grandiose? Some special audio-visual effects? A bush?? That’s all He’s got?
Decades have passed since Joseph and his brothers journeyed down to Egypt, and we turn a page to a new Book. In this one, we’re still introduced to many firsts, but unlike Genesis, these upcoming firsts have to do with our experience as a nation. For one, this is the first real diaspora experience. No longer a servant sent to fetch a wife or a young man visiting his uncle on temporary leave, but a whole People living away from their land, sharing a fate for good and bad.
We’re introduced to our first national leader. Up until now we had “forefathers and fore-mothers”; we had family leaders, inspirational characters, dreamers, warriors, great men and women, but none had to deal with a crowd of more than 600,000 all at once; none got to speak with G-d face to face. And yet, here’s how we first meet Moses:
“And there went a man of the house of Levi, and took to wife a daughter of Levi. And the woman conceived, and bore a son… (Exodus 2:1-2).
A man. A woman. A child. Nothing special. Does the Torah not know who is this man from the house of Levi? Who is the woman? We know. Later we get a precise family lineage, and we can trace it all the way back to Abraham, but for now, it doesn’t matter. Moses is not chosen because of his family connections, but because of who he is and how he chooses to spend his life. One of these moments is the Burning Bush.
What’s so special about that bush?
It says! “It burns and is not consumed”.
Well, how would anyone know that???
Usually when we see fire, we rush to put it out, or escape to get away.
In order to know that the fire is steady, on-going and divine, we need to actually stop from our race and usual preoccupations (and pick up our eyes from that text!), notice that there is something unusual and take a moment to check it out. This is what Moses does. Only then “when he (God) saw that he (Moses) had turned aside to see, God called to him… (3:3).
You see, God indeed could have done anything; we know that by definition. He is God. But the miracle is that He didn’t need to; the miracle is that Moses had the ability to notice the greatest and the littlest details around him, and find God’s presence within them, without the flashy stuff.
We often think, ‘oh, if only I saw the sea split, maybe I would believe’. Moses here reminds us that it’s not needed. Slow down for a moment and look at that bush. God’s presence is right here.
Shabbat Shalom. 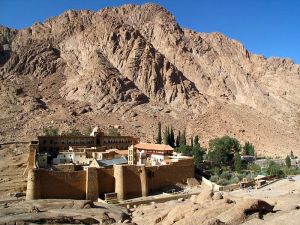 Santa Katarina Monastery,
supposedly at the foot of Mt. Sinai.
To the left is the Burning Bush…