Mixing it up. Or not.

I still like reading to my kids, though they are all pretty much grown up with excellent reading skills of their own. So it was a recent late Shabbat when the timer on the light had another hour to go, that I pulled out one of my favorites.
Seder Yom (“A Day’s Order”) by Adam Baruch, one of Israel’s finest writers, forever straddled the Jewish Orthodox and Modern Israeli worlds is a fabulous collection of shorts, connecting halacha and the halachik process to current daily life, often based on questions people asked him. I open randomly, and chanced upon a section titled sh’chenut tova, good neighborlyhood. Yes, I know, this word doesn’t – yet – officially exist in English, but for the sake of this conversation, it means neighborly relationship. He wrote the piece in response to an inquiry about erecting fences. Quoting Jewish sources, the writer states that erecting fences builds good neighborly relationship. For only when I have a safe space to be who I am, and so do you, we can also have good relationship with each other.
I thought about it again in conjunction with this week’s Torah portion which on one hand includes the most famous “Love your neighbor as yourself”, and on the other hand, peculiar laws such as “don’t mix wool and linen in the same garment”. Any chance they are actually related, or that in some way, each can help us understand the other better?
We tend to think of “love your neighbor” as a mitzvah that “makes sense”, while of “sha’atnez” (the mixing of wool and linen) we think as a “chok”, a commandment which has no rhyme and reason and we can’t comprehended. But, seriously, can we, who on most days barely stand ourselves, love another human, possibly a stranger, just as much? What should we do on those days when we short-change ourselves? Do the same to another?? And what about the fact that the Torah, although stretching us up, is not unreasonable, while this law, in its simplest form, is??
Since it says here “you shall keep (guard, maintain) my laws” (Leviticus 19:19), Rabbi Hirsch takes us back to the first time we see the verb “to keep”, lishmor, which is when G-d placed the first humans in His Garden (Genesis 2:15). What did he need to “guard” or “maintain”? For that, we go just a little earlier, to the 3rd day of creation, when G-d says: “’Let the earth put forth grass, herb yielding seed, and fruit-tree bearing fruit after its kind, wherein is the seed thereof, upon the earth.’ And it was so. And the earth brought forth grass, herb yielding seed after its kind, and tree bearing fruit, wherein is the seed thereof, after its kind; and God saw that it was good” (Genesis 1:11-12).
Like a chorus, the repeated statement is “after its kind”: each was created to be who and what it is, and to grow within its realm to the fullest potential. Certain mixes interrupt with this process, with this purpose of creation, and we have to guard against that.
When I was very young, I was told that it’s not good to mix wool and linen because they shrink differently in hot laundry. Well, maybe that too. But the Torah, through many commentaries, tells us that “wool” and “linen” are two very different “kinds” beyond the thread in a garment. For example, there is a midrash that this is a reminder to the fight between Cain and Abel: Cain brought flax seeds as a sacrifice (linen) while Abel brought sheep (wool), and as we know, it would have been better if these two “kinds” were kept separated.
Interestingly, the same verse (in this week’s reading) also instructs us not to “let (your) cattle gender with a diverse kind”. We gain some insight from a unique word used here: “kil’ayim”, which means “materials that are mutually exclusive”. Rabbi Hirsch, in his poignant dig into Hebrew roots, points to the fact that “kil’ayim” shares its roots with “kele”, jail, prison. It literally can mean – “two jails”. Accordingly, mixing things that don’t fit with each other “imprison” both of them in a place they should not be. Some things help us grow and some things – don’t. In a world where everybody supposed to live happily happy after, these ideas might seem unpopular, but for those of us who traveled a bit and got some dust under our earthly shoes, we know it’s so.
Which brings us back to “love your neighbor”. Because of the Hebrew grammar in the verse, Rabbi Hirsch concludes that we are not asked to “love” all people in the simple or romantic sense of the word, which would likewise be impossible, but, we are asked to see them as we’d like to be seen ourselves, namely, as equal and yes, separate, special human beings created in G-d’s image, each unique for who he or she is. Nothing more. Nothing less.
Shabbat Shalom. 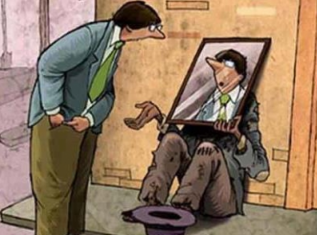 1 Response to Mixing it up. Or not.