Something on love, hate, what’s between and what’s beyond

I spend the morning of Tish’a Be’av arguing with a booking.com representative after they canceled the wrong reservation which they were unable to reinstitute instead of another one, which they were unable to cancel. I’m furious, and I have a feeling the whole neighborhood can hear me, the repetitive keeps saying ‘sorry mam’ in a monotonous, careless voice, which just makes me madder. At the same time, I very conscious that it is Tish’a Be’av and that the Temple was destroyed all because of baseless hatred, and as I’m sure I hate this guy and everything he stands for with all my might, I also wonder, would that count? Is that baseless hatred??

I do not like Tish’a Be’av. It’s hot and long loaded with an overdose of guilt, and just because a little guilt might be good, it doesn’t make too much of it great. This year especially, with the “situation” / “operation” in Israel, it feels worse. There are only two consolations: one is that it’s so depressing, it makes it easier not to eat, and two, that eventually it’s over.

But the question remains: what is baseless hatred? If you spot a good parking space and someone cuts you and steals it and you mumble, I hate this person, is it baseless?? Not really. Baseless has to have no base, no interaction, nothing. You hate the snootdisuhts people who live in the snootdishuts islands whom you’ve never met and know nothing about, just because. You hate them for who they are. Why is it so bad? Because it is if we say: G-d created the world the way He wanted, made each one in His image, and I hate G-d and His creation, which is another philosophical trap… So I wonder if real “baseless hatred” is even possible, or maybe, the rabbis are telling us that the Temple was destroyed because of things we do not understand and can’t do anything about?

By contrast, a week later, a beautiful full moon shone over Jerusalem marking Tu Be’av, the 15th of the same month, Chag Ha’ahava, or the Jewish “Valentine’s Day” (sort of). On that day, so says our tradition, the available men and women would go to the fields dressed in white to choose their mates.

And in between, a prayer. The Torah portion of Va’etchanan with Moses’ last speech pleading, asking, teaching, talking to the generation that did not stand at Sinai as adults and trying to instill a paramount core concept.

The Jewish People are not an organic creation of time and place. Rather, their birth is a creation of G-d, and just like the first creation of the universe, it is a creation of yesh me’ayin, Ex-nihilo – “out of nothing” so is this People. Each member might not have the same language, specific history, ethnicity or culture as the next one, but they continue to be one extended family with a unique mission. One might say that it is natural for one nation or another to have great influence on the world but it’s highly unlikely that this nation will be tiny, scattered and persecuted. Yet, this is what is promised here, and that is what eventually happens. The Jewish life story never bends according to the customary laws of nature.

Why? Over and over we ask this question. Why? Why the Jews? Why us? Why like this?

The text continues: “…Because He loved your fathers and chose their offspring after them…” (:37)

What is the reason? Not our great qualities, wisdom, strength, beauty or talent. But love. Why does anyone love any person over another?? We can reason all we want, but at the end of the day, there is no explanation. As if to say, there is an irrational element in this journey that cannot be fully figured out no matter what. Even here is G-d’s fingerprint: It’s just so. And no matter how long we explore, question and wonder, at some point it’s just “so”. We can debate for hours, discuss endlessly, write poetry on thousands of pages, on and on, but we do not fully understand love, any more than we understand hate. We just know that while both are powerful forces, one is devastating while the other is a energy and life giving. We can’t fully explain it, but we can feel it.

What’s left for us to do? Keep G-d’s “statutes and His commandments… that it may go well”. The Hebrew says, “asher yitav lecha” from the word “tov”, good. “Good” in the Torah usually does not mean a kind, considerate loving being, but one who fulfills who s/he is. Think of how we say, ‘this is a good table’. We surely don’t mean that this table is embodied with acts of loving kindness. We mean that it does what it supposed to do in the best possible manner. Likewise for us: following G-d’s mitzvot provides us with an opportunity to be better versions of who we are. 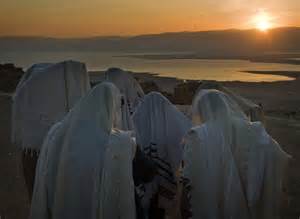 This entry was posted in life and some, shabbat shalom, פרשת השבוע לחילוני האדוק. Bookmark the permalink.