Light One Candle: On Joseph and Hanukkah

It might be no wonder that when Jacob meets Pharaoh in 2 Torah portions, Jacob will tell him: “… few and unhappy have been the years of my life…” (Genesis 47:8-9).
The reading this week begins with the words Vayeshev, “and Jacob settled”… (37:1). We might think – finally! After all the troubles, the tension between his parents, the threatening brother, the escape, 20 years of hard labor at his father in law’s, the switching of his wives, the struggle with the angel, the scary meeting with Esau, the loss of his beloved wife at childbirth, the rape of his only daughter and his sons revenge thereafter, it’s time for Jacob to “settle”.
That’s maybe what Jacob thought as well, but new trouble is already brewing. The very next verse claims that “these are the generations of Jacob, Joseph was 17”, introducing us to a whole new set of challenges with teenagers.
Family therapy, as described elsewhere in this collection, might have helped them see some of the repeating patterns. For example, it says that the brothers hated Joseph (37:4). Hate is a powerful word, and sends us back to the last time we heard of hate, which was when the text tells us that Jacob hated Leah (29:31). Wait, Jacob and Leah had six kids together. Did he really hate her? Whose voice is this?
Turns out, from Jacob’s perspective, he loved Rachel more than Leah, meaning, he really loved both (29:30), but it was G-d who saw that Leah was hated. Apparently, to be compared and loved “less” – as a spouse or a child – feels like hatred, not like ‘little love” and if, sadly you’ve been there, you know that too.
When the next generation takes the stage, Leah’s and the handmaids’ children ‘pay back’: in a place where their mom felt hated, they now hate Joseph.
What does Joseph think? Surely, he knows and feels what’s going on. The brothers already butchered a whole city; they were not shy with their opinions. Is he that confident? That arrogant?
Some commentators look at the word na’ar, describing Joseph as a lad (37:2). Joseph, was not only good looking (dressed in a beautiful coat to complement his lovely appearance), but internally, he remained young at heart, truly optimist. Whatever the task, he is ready and faithful that things will be ok. No wonder he’s described as the “generations of Jacob”. He is the continuation of Jacob: one who doesn’t shy away from misfortune, or honors but faces it and overcomes it (with style!); one who doesn’t hope to “settle”, “ride” or “fall”, and just “is”.
At his father’s request, Joseph goes to look for his brothers, a “short” journey of about 85km from Hebron area to Sh’chem. The last time we heard about Sh’chem was when the brothers joined together to defend Dina’s honor and killed every male in the city by sword. Our ears should be ringing by now with scary music like in any other movie; we should scream: ‘run, Joseph, run’!
But Joseph goes, and we know the rest of the story: the brothers contemplate to kill him, and eventually sell him to a convoy of Yishma’elites who “go down” to Egypt. “Going down” is a repetitive theme of this parasha. Not only Joseph goes down to Egypt (or rather, “being taken down” – 39:1), but also Judah “goes down” from his brothers (38:1) on a whole separate story. And as if Egypt is not “down” enough, Joseph is further taken down to the bor, prison (following another scandal with a piece of garment, this time a shirt ripped and left at his master’s wife’s hand 39:7-20). Bor, by the way, literally meaning “hole”, same word that was used for the hole his brothers threw him in.
Things look bad.
With Jacob depressed, the brothers divided, Judah away and Joseph in jail? Things looked really bad.
This parasha, Vayeshev, is always read right around Hanukkah. What’s the connection?
Greece in Hebrew is Yavan. The kabalists say that if we read this word backwards we get noy, which means outward beauty. Ancient Greece was all about outward attraction: the structures, the human body, and (just like today-), it was very (very!) seductive. We could have been people of a great cultured world! What were the chances to survive this massive attack? Things looked really bad here too.
But we have a principal, that davka (especially) when it’s dark and gloomy, an unexpected light begins to shine, like a flower which sprouts from a seed which rots in the depth of the earth. In Hebrew, shachor – is black but shachar, which comes from the same root, means dawn.
There is a strange commentary teaching that Joseph is Esau’s Satan. This doesn’t translate very well but what the text is trying to say is that Joseph is like a picture’s negative to Esau: Esau looked ok to his dad on the outside, but his inside was not so. Joseph looked “pretty” on the outside, playing with his hair and clothing, but his inside was strong and amazingly reliable.
Last but not least, we started with Jacob’s lineage but we focused only on Joseph. The previous reading ended with a long list of Esau’s begets. Rashi compares it to finding a pearl in the sand, sifting through lots of names, until arriving at the right one. Likewise, the attraction of the Greek culture was being a man of the big world; do some of this and some of this, yet in the process, lose ourselves. The Torah, possibly from the root y.r.h. to shoot, asks us to focus, like the rays of the sun under a magnifying glass, and from there to create a spark.
Shabbat Shalom & Happy Hanukkah. 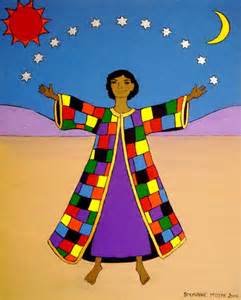 1 Response to Light One Candle: On Joseph and Hanukkah