We often refer to Abraham as the “first monotheist”, erroneously, I might add. First, we have no such word in Hebrew – מאמין באל אחד so that should make us already suspicious as to its origin, and second, we might recall Adam, hearing G-d’s voice in the Garden. “Ayeka?” asked G-d and Adam didn’t ask who is it that’s calling, nor went to check who’s on the other line. Similarly, when Noah received instructions to build the ark, he didn’t go to get a second opinion and another bid on labor and materials. He too, knew exactly who’s talking.

So what is so special about Abraham then?

In spite of the beautiful midrashim about him noticing the sun and the moon, and realizing there must be a greater power than both, his “knowledge” that there is one G-d was not the big news. The news was the ability to have an on-going, practical relationship with that Voice that can maintain and connect to that belief on a daily basis, through everything around us.

Chances are, people always believed. In Something. The feeling of “little me” in the forest, or a “big wow” when we stand on the edge of the Grand Canyon, is not “ours”. All we can claim is the establishment – and the maintenance – of a unique way of life, a way of life aiming to connect heaven and earth without letting go of either one.

Back then, as today, people would gravitate to either of two extremes: those that took the text literally: eye for an eye – meant just that, and could result in blinding another (unlike Judaism which always understood it as prescribing just monetary compensation); “do not light a fire on Shabbat” – meant sitting in the darkness (unlike Judaism which taught “do not light ON Shabbat” so light it before and enjoy the day with warmth and delight).

Alternatively, there were those who prescribed “spirituality” and “feelings of the heart”, but Judaism considered “love” which comes without a clear to do list, often meaningless and even dangerous.

Shortly, we are children of a way of life that yes to both paths and no when either comes without the other. This was what Abraham started and in an interesting way, is continued in this week’s parasha.

The construction of the Mishkan comes to answer exactly this: the spiritualists might say that it’s ridiculous to even try to build a “house for G-d”; the “practicals” might become confined to the structure and adore it all else. Once again, we said yes to both, and no to either concept if coming just by itself.

What is the Mishkan? A mobile temple; a synagogue tent that one can fold, load on carts and take along during the journey. It turns out, even G-d understood that we can’t just travel with nothing but a cloud; that we need something to remind us of him, to actively connect, to focus all the different tribes together in a spiritually meaningful way again.

“And they shall make me a sanctuary and I will dwell among them”, tells us the text in Exodus 25:9 in perfectly bad grammar (me / them), but it turns out that our doing for Him, is what bring His presence to dwell among us. The name of parashat Truma, usually translates as “donation” actually comes from ר.ו.מ. same root we use for “romemu” (praise) “neromema” (let us praise) and also “rama” – high place like Ramat HaGolan, so really G-d is not asking us to give Him a “donation”, but to give Him – and us – a “lift”, a reminder to go higher. And at the same time, the text asks us to “take a truma”, “take”, not “give”. After all, what can we give? whatever is ours, is His. We, in essence, take from one pockets, shift it around, and place it back where it needs to go.

The Mishkan is amazing, and each of its pieces has, not just esthetic value but also spiritual ones. Again, in the either –or battle, we are going for both. Some people might say, ‘who cares if Wagner was pro-Nazism if his music is great’; or, ‘what a beautiful picture! Look at the light and the composition’ oblivious to the fact that it’s a picture of pain and suffering. The Mishkan, even though it was very beautiful, was not just about beauty. It was about holiness and our connection with G-d. For example, the curtains were red in the bottom (red is adom, like adama (earth), adam (human), and dam (blood), and the top was heavenly blue. It between the colors were a blended purple, to remind us of where we stand – not being animals but not being G-d either.

Another example is the special instruction for the aron, the ark. We are to make sure the carrying poles are never removed so the ark – and the Torah in it – are always ready to travel whenever we are. This might be a construction tip, but symbolically, it means that to this very day, no matter where we are, the Torah is ready to travel with us.

Every year, we read parashat Truma around Purim, today being Rosh Hodesh Adar. Adar can be broken into two words (sort of): a-dar – dar means live, and alef stands for G-d. This is another reminder for G-d “living with us”, especially in time of Hester, hiding – conveys by Esther’s name, and by this last month in the original Jewish calendar.

There are very few places in the TaNaCh that mention this kind of wealth, magnificent cloth, gold, beautiful vessels. Did the “stuff” from the Mishkan made it to Achashverosh’s party? Where is that goblet?? We might have to keep looking… 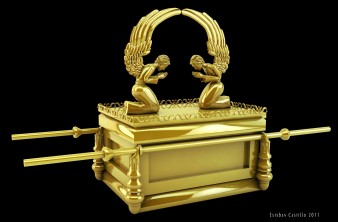 This entry was posted in Uncategorized and tagged abraham, ark of the covenant, exodus, monotheism, truma. Bookmark the permalink.