Day 7: A Shot of Patriotism Straight to the Vein

When my kids we young(er), we used to read the “Christmas Menorah”, the true story of a 1993 Billings Montana incident, when a brick was thrown through the bedroom window of a 5-year-old Jewish boy, displaying a menorah. Horrified, committed and proud, the town responded. The Billings Gazette printed a full-page menorah, which thousands of citizens pasted in their own windows in a show of solidarity that was trumpeted by the world media as an example of how one small community stood up to hate ( by the way, six years passed and the same, sadly, was true for Sacramento – minus the book when after the synagogue fires of 1999, the Sacbee printed full-page “chai” ads, many still visible for years after).
One way or another, Billings seemed like a fit place for Shabbat, and although I was not able to get a response from the local synagogue – because of summer hours and / or lack of staff – Billings did leave an impression. It seemed that in Montana everything is big: the stores, the parking lots, the trucks, the fields and the people, not only physically big, but at heart. Yes, I know I am generalizing from few examples, but what else can we do. I chose my motel because it was walking distance from the beautiful Riverfront Park and a trail along the Yellowstone River. I started walking and cars slowed down to offer me a ride, and if you think that’s creepy, some were “older ladies” (probably about my age :-). The attitude repeated everywhere I went; the place was beautiful and friendly and large in all senses of the word. I was so excited, I felt like Rabbi Avram in the Frisco Kid, looking this way and that and exclaiming, “I tink tis is the vest! Oh, vhat a vonderful country”!
So maybe all that somehow had to do with my stop much later that day at Mt. Rushmore. Because initially, I admit, Mt. Rushmore was not on my list: It would add some extra miles to an already long day, driving over the ever so wow Bighorn Canyon (and let us not forget the 10% grade climb from the canyon to 9430 feet elevation!) and the east Wyoming Rockies; and besides, what’s to see? Not like a natural wonder or anything. Four residents carved into a stone?? I’ve seen the picture too!
But, you know, when you’re in love you sometimes make unexplainable decisions, and this whole trip-thing has had the same feeling. So shortly after Gillette, WY, I veered over to Wyoming State highway 16. Let me just say that those 135 miles (from Gillette to MR) while well-paved, beautiful and smooth, are not a quick drive – and the guys, passing me angrily, showing me a middle finger when I slowed down to take a picture of the “south Dakota welcomes you” – did put a damper on my best mood and intentions, so I had plenty of time to doubt my actions.
I arrived at Mt. Rushmore at dusk, wondering if again I am late, but miracle: Mt. Rushmore has a “night show” which was scheduled to start within 15 minutes of my arrival. Not only that, but again, a “coincidences”: I had time to sit in my finally parked car for a few more minutes, listening to Etgar Keret read a story on NPR…
East Wyoming and South Dakota present miles and miles of mostly empty highways, but all of a sudden, as if out of nowhere, I was surrounded by hundreds, if not thousands of people, filling the amphitheater. It was getting dark when the evening program began, welcoming the guests from each state and around the world. We were told us about this grand sculpture which took 14 years to complete, and the four presidents carved in it themselves. When it was itch dark, the stones were lit. Then members of the armed forces were invited to lower the flag ceremonially. There were tens of people on stage but each was introduced personally, and some introduced their children who were serving elsewhere. The crowd cheered in appreciation and admiration to each. Yes, I know; but that’s exactly it: my rational mind was working over time, analyzing historical examples, danger of extreme nationalism and fears over upcoming elections (from all sides- it’s fascinating to listen to local radio -) and at the same time, here I was, getting a shot of patriotism straight to the vein. And it was hard not to simply feel inspired.
I drove into leisurely sprawled and well lit Rapid City, South Dakota late, marveling at everything: that there’s good roads and clear signs and this possibility to travel; that everywhere you go, there’s light and water and sometimes even reception; that sooner or later, you’ll find a bathroom – usually clean, and coffee and a shower and a place to put your head, and a smile; that somehow this whole thing works;  there are people – good people – who care and love this country. 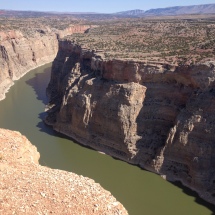 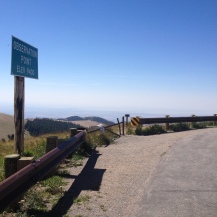 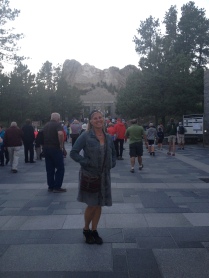 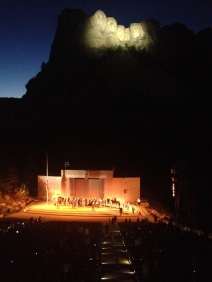 4 Responses to Day 7: A Shot of Patriotism Straight to the Vein