On Trees, Water and Trust

Due to my Ashkenazi heritage, I have nothing to eat on Pesach and am inundated with all sorts of “chumrot” (strictures), but I am thankful for a beautiful tradition– the celebration of Tu Bishvat.
It’s a bit ironic to write about Tu Bishvat when there’s a major snow storm outside (finally!), but also so appropriate. For while Tu Bishvat is all Israel – just walk out among the blooming almond trees and breathe and it’s right there – in the diaspora, especially in the snowy, cold diaspora, that’s a whole different story.
The first thing the Ashkenazi community could do to mark Tu Bishvat was to declare it a non-fast day (got to start somewhere…). Later they added dried fruits, not as a treat, but because there was nothing else that was edible in the winter months from the Holy Land. In the 17th century, the kabalists add the Tu Bishvat seder which has become more and more prevalent in recent decades.
So much so that this past Sunday, I had the honor and pleasure to co-lead a Tu Bishvat seder as part of my internship at New York’s maximum security women prison. It’s always eerie: to pass the guards, towers, check ups…I feel a multi-generational PTSD… But once inside, in the prison’s “Jewish chapel”, it’s a different story. For just a couple of hours, the small room is transposed: the table covered and laden with grape juice, both red and white, as well as bowls of various dried fruits and nuts. We chat and learn together; we discuss what kind of fruit we might be – shell on the outside or pit inside? My co-leader and I even manage a halachik argument: should we say a blessing over each cup or just once? We could have been anywhere: a group of women munching on goodies, casually talking about life, coloring pictures of trees to decorate the thick concrete walls around with our art. When it’s time to say good bye, we hug affectionately till our next meeting. If Tu Bishvat ever meant to be a reminder of warmth, life and hope in cold places, celebrating it in prison must be best.
*******
It’s the week following the OU statement about women leadership in the Orthodox community; and now, the week of “nevertheless”. It’s also the bar mitzvah of my daughter’s bat mitzvah (don’t do the math-), when there were still three generations of women alive in our family, celebrating together. Most of all, it’s Shabbat Shira – the songs of Miriam and Dvora, the first – by the shores of the sea, the latter – under a palm tree.
Miriam and water go together, from the time she was a little girl watching her brother from the bulrushes by the bank of the river, to the loss of the well with her death, later in the Book of Numbers, through her song this week.
To be sure, the song started out with Moses and the people, expressing their joy and thankfulness, but it wasn’t complete until Miriam and the women joined in. There are numerous fun, sexy if I may, lively midrashim, regarding the women in Egypt, who, throughout the years of slavery, were the ones who pushed for surviving and thriving against all odds. There was no way to limit their creativity and ingenuity, and in many ways, though the background is very different, not much has changed since. The song is just one of those moments when it’s obvious, that only when everybody gets together, allowing each to blossom in their own way, the celebration is complete.
*******
How to turn a band of slaves into a nation? There is lots to do. They need a calendar so they can be synchronized, which we started last week. They need to be safe. They need food. They need water. They need direction. They need rest… In the middle of trying to get all this together, suddenly they long to go back… Growing up is a challenging journey.
One of the first skills they must acquire is learning to trust. Moses tries to explain. This is not the time for long teachings, and he does get rebuked for it, but what he says is beautiful:
“”ויאמר משה אל העם אל תיראו, התיצבו וראו את ישועת ה’ אשר יעשה לכם היום… ה’ ילחם לכם ואתם תחרישון
“And Moses said to the people, do not fear, stand up and see G-d’s salvation which will be done to you today… Hashem will fight for you and you’ll be silent” (Exodus 14:14). This is the easy translation, but what if we stretch the words?
“Fight” in Hebrew – yilachem – shares its root with bread – lechem, as in struggle for basic sustenance; tacharishun – can mean, be still, but it can also mean “you will plow”: (lehacharish – be quiet; lacharosh – to sow), perhaps sharing a form of purposeful, quiet participation and attentiveness.
If so, this same verse can be read: ‘Hashem will give you bread, and you will plow’. In the desert, water comes from the ground (in the form of traveling wells), and bread – rains from the heavens (in the form of manna). Life is magical and contrary to the natural order of things. In “real life”, you’ll enter a new partnership, not that of slavery. You no longer work for nothing, nor do you work for a foreign king’s gain. Your future partnership is with G-d: you work, so Hashem can give you your sustenance. What do we need to do to allow this to happen?
The manna which also appears this week is another exercise in trust: It comes down every day in exactly the right amount needed, except on Shabbat when a double portion comes down on Friday. What’s it like to go to sleep with nothing yet know that all our needs will met tomorrow? For us, maybe the taste of that peace and trust is the gift of Shabbat. 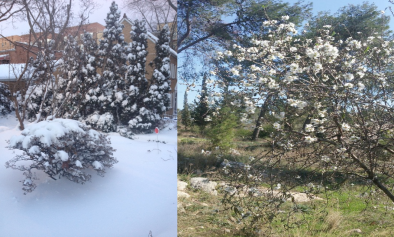