A famous folktale of unclear origin tells about a king who asked his three daughters to describe how much they each loved him. The oldest said, like gold (or bread, or the heavens and earth and the whole world); the second said, like silver and jewels (or water, or the sun, moon and all stars); and the third said, like salt.
The enraged king commanded to kick her out of the palace, but just before she left (or some time after, when he was invited to her new palace…), she made a feast for him without salt. “What’s this disgusting stuff”? he called, dismayed at the tasteless food. “That’s to show you how much salt is important, and how bland like is without it”.
Salt made its way into linguist expressions. In both English and Hebrew, we can call someone “salt of the earth”, when referring to a person who is thoroughly decent, hard working and instrumental to his peers. The metaphor appears in the Sermon on the Mount in the New Testament as part of a discourse on salt and light (Matthew 5:13). The salt’s saltiness is described as essential and that quality as needed in relationship between people (having salt as part of And having peace- Luke 9:50).
And in this week’s reading – G-d promises Aaron and his descendants a “covenant of salt” – ברית מלח, a forever covenant (Numbers 18:19), per Rashi, like something which never spoils; something that not only is healthy (in measure), but causes health to others; a covenant of absoluteness and immutability (Rav Hirsch).

The reading is called Korach, after one of Moshe’s cousins who seeks to take away his leadership. Korach’s name, unusual as it is, is spelled kof.resh.chet – ק.ר.ח.. Rabbi Hirsch points that the same root is used for the word for balding (karcha – קרחה: check Leviticus 21:5), a smooth interior of a garment (karachto, check Leviticus 13:55) and frost (kerach, Genesis 31:40), which is also the word for ice in Modern Hebrew. The root means “cohere”, which the dictionary says means- 1. to stick together; be united; hold fast, as parts of the same mass. 2. Physics (of two or more similar substances) to be united within a body by the action of molecular forces. 3. to be naturally or logically connected: 4. to agree; be congruous.
According to kabala, the ideal balance between thought and action is hinted in the letter heh – ה. The letter heh ה is made of three parts: the top – for thought; the right side – for speech and the left – for action. Notice, that the left side is shorter than the others and that it stands sort of “under” the top, indicating that action is subject to thought.
Each of the letters is Korach’s name is very similar to the heh, but is different, and how it’s different is significant to what happened and what we can learn.
The letter kof ק is like a heh ה except the left line goes down lower than the right, indicating a situation when those who act are not under those who think, which drags the former lower.
The letter resh ר is like heh ה except it has no left side at all, parallel to Korach’s demand to separate thinking from doing.
The letter chet ח is like heh ה, except the left side is closed, making all three aspects – thought, speech and action – equal.
Korach demanded conflicting things, pretending to want to be “equal” as in “kulam kdoshim” – כולם קדושים, everybody is holy, and yet, asking to be the leader, unique above everybody. Korach is considered the prototype of divisiveness. His criticism, even if it had some valid points, is not constructive. He is not interested in fixing or improving things. It is all about glorifying himself and only himself. Hence, his priorities are mixed up; his “gang” is united by who they are opposing, not by positive input and desire for anyone’s well being; and their “togetherness” is only temporary. He is a role model for how not to be, how not to do things and thus is not sustainable. Like ice (kerach – קרח), Korach and his group break apart and melt away when light shines on them. 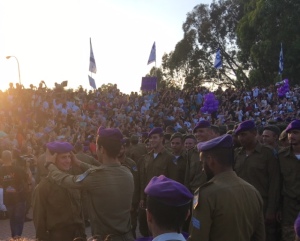 This entry was posted in life and some, shabbat shalom, פרשת השבוע לחילוני האדוק and tagged brit, covenant, giv'ati, korach, salt, salt of the earth, Torah. Bookmark the permalink.