Going to inquire of G-d

We seem to be the people of the 2nd. First’s – are just not our thing.

Take creation for example: the first story was just perfect. Everything was in the right place: the water that hung above, did just that, and the water below – lay peacefully below. The earth rested secure and the trees grew up beautifully. The sun, moon and stars twinkled in the sky. The fish and the bird swarmed about. The animals roamed around and the one human showed up on the scene as the crown of creation. Then came Shabbat and everything basked in glory.
But that story is like a still-painting. It has no continuation.
Then the second story opens, like toys falling out of a box in disarray: there are no plants, no rain, no animals; steam comes out of the earth; a strange surgery is required in order to produce two distinct humans. A snake shows up out of nowhere followed by disobedience, embarrassment, accusations, banishment and expulsion. You’d think this would be the end”. And yet, that was really The Beginning. And here we are.
Seth, the father of humanity, is not Adam and Eve’s first (or second); Noah’s son, Shem, who is our forefather, is not the oldest, strongest, or most beautiful. And most likely, neither is Abraham. Yishma’el is oldest, but Isaac, Yitzchak, is the one to inherit the spiritual blessing. Now comes the next generation.
What was Yitzchak telling Rivkah when he brought her into his mother’s tent, when he realized he felt love for her, and saw she was “the one”?
‘See honey, this is how our life will be. This was my mom’s tent and now it’s yours. We too are entrusted with my father’s mission and journey, except for this one thing I wanted to talk to you about… well, I don’t know if they told you’, he says when they stroll through the fields, the sun setting in the west, ‘it’s my brother. He’s quite upset with how things went down. And truly, I can’t blame him. What, with my dad taking a second wife, then kicking her out… I am definitely not going to do that. Let’s just have one kid and raise him well’.
Of our forefathers and many other Biblical heroes, Yitzchak and Rivkah are unique in their monogamous relationship. When they can’t have kids, even for twenty years, longer than the proscribed time, they keep praying. Then the text says (Genesis 25:21):

כא וַיֶּעְתַּר יִצְחָק לַיהוָה לְנֹכַח אִשְׁתּוֹ, כִּי עֲקָרָה הִוא; וַיֵּעָתֶר לוֹ יְהוָה, וַתַּהַר רִבְקָה אִשְׁתּוֹ. 21 And Isaac entreated Hashem for his wife, because she was barren; and Hashem let Himself be entreated of him, and Rebekah his wife conceived.
G-d heeds the prayer of Yitzchak, and not Rivkah. Why? The temptation is to insert our contemporary feministic reading: ah, of course! G-d listens to men and not women… But aside from being nonsense, going this route, we’ll be missing something.
Quite often we read the stories with the end in mind. But what if we’re reading this for the first time; what if…
Perhaps, Rivkah, who has seen a rougher world than Yitzchak, already knows that the unavoidable can’t be avoided. She therefore knows there will have to be (at least) two children, but as no one yet had twins, that option cannot cross her mind. What she might be most worried about is to not be Hagar; to not get kicked out; to not lose her beloved to another. Accordingly, her prayer would be to not mother the “1st” child”, but instead, ‘let me be the one pregnant with the 2nd child’.
Yitzchak, who has seen G-d’s incredible miracles first hand, can – maybe – offer a different prayer: “Dear G-d, please give us a child we can raise to be the successor of this path”. Hence the Torah says, Hashem listened to his prayer. That also explains why Rivkah was so troubled by her strange pregnancy. First, because no one had twins before. And, because there was no “first” before her pregnancy. How will this work out?

Lidrosh Elohim – לדרוש אלוהים
The same girl who tirelessly ran to serve the unknown visitor and his camels at the well; the same girl who told her family “elech”, I will go – from whom the whole world should learn asking a girl first and acquiring her consent prior to deciding for her if she’d like to be with anyone – is the one, who, is the first person in the Torah to go and seek G-d.
Well respected commentaries on this concept sadly minimize this great act. Rivkah, they say, went to seek advice from the judge or priest of the time; she went to the beit midrash (the study hall) to ask the learned what’s going on inside her own body. I resent the plausible read of “Elohim” here, as “judge”; plausible but one that reflects on its later times, when we became bound by structured prayers and lost that ability to go out and “inquire of G-d” directly, without intermediaries, and robs me of my role model. 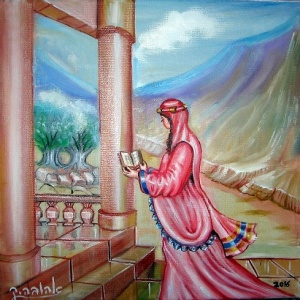