America is celebrating Martin Luther King Jr this weekend. Had he a Hebrew birthday, it would have been between this week’s Torah portion and the next, the height of the story of the Exodus.
*******

ג וָאֵרָא, אֶל-אַבְרָהָם אֶל-יִצְחָק וְאֶל-יַעֲקֹב–בְּאֵל שַׁדָּי; וּשְׁמִי יְהוָה, לֹא נוֹדַעְתִּי לָהֶם. 3 and I appeared unto Abraham, unto Isaac, and unto Jacob as God Almighty, but by My name Y.H.W.H. I was not known to them (Exodus 6:3). We open this week’s reading with a strange statement. G-d introduces Himself as the One who “was seen” to our forefathers as “God Almighty”, but, until now “not known” in his “name” of “Being”, “Eternal Existence”. What is the difference between “being seen” and “being known”? and why the move from active (“I appeared”) to passive (Hebrew structure of nif’al, “was known”, as opposed to i.e. caused someone to know, just like – caused someone to see)?
I think the Torah challenges our way of thinking about acquiring knowledge. God can “appear”, “be seen”, but “being known”, especially in the Biblical sense which implies an intimate connection, takes a different skill. That kind of deep, inner knowledge depends not only on the informer, but also on the one receiving. The knowing can happen only when we are open to knowing; when we do something for it.
So the first step towards freedom is not magnificent plagues, or matza, or packing. Not yet. First, just an internal awareness, a tiny crack to let the Light in. For now, that’s all.
*******
In Tel Aviv there’s a sculpture: an upside down pyramid expressing the idea of slavery and freedom as mirror images; Sinai and slavery reflecting each other in water. We’re substituting one slavery for another: Freedom means being free to be God’s servants. Not Pharaoh. The two can so easily be mistaken. Only a tiny step between them. And a whole world.

Undoing the Web of Enslavement

בעשרה מאמרות נברא העולם…
“The world was created through Ten Utterances, our sages tell us” (Pirkei Avot 5:1). And yet, one wonders: The same God Almighty who can create a perfect world in 10 sayings, can do in just one!Why all the extra words? and the extra work?
The journey of a band of slaves becoming a free people, is fascinating, perhaps because it’s something that each person can identify with on many levels. Whether the story of one’s birth, or our struggle with various kinds of mitzrayim – narrow places – of enslavement (physical, emotional, spiritual) and our complicated journey to freedom.
Once again, we read this week, about the first seven of the Ten Plagues, reminiscent of the Ten Utterances as well as the later Ten Commandments; and once again we may wonder, why so many plagues? If G-d – or anyone for that matter- wants to get someone out of a bad situation, why not just go in and get them out? And what about the people themselves? Didn’t they know they were suffering in slavery? Didn’t they groan and moan, crying and wanting to get out??
Rashi, the medieval commentator, points to Exodus 6:9:
וְלֹא שָׁמְעוּ אֶל–משֶׁה מִקֹּצֶר רוּחַ וּמֵעֲבֹדָה קָשָׁה –
“and they did not listen unto Moses due to impatience of spirit, and cruel bondage”. Drawing on the unique term “kotzer ru’ach” – literally meaning, shortness of breath, he says that someone whose breath (“ru’ach”, also wind, spirit, soul) is short, cannot have long breathing. Isn’t Rashi stating the obvious?
Rabbi Binyamin Lau explains Rashi: “This is like a person who is experiencing an asthma attack, and seeks immediate relief. As he reaches for his inhaler, someone tells them about an experimental new drug which might be available someday. The patient’s reaction is likely to be – I’m choking here, and you’re talking to me about something long term in the future? Likewise, the rulers of Egypt were pressuring the Children of Israel, leaving them breathless, unable to hear anything”.
Next, G-d explains to Moses the famous stages to the delivery from bondage, using the ארבע לשונות גאולה: Four Expressions of Salvation:
והוצאתי… והיצלתי… וגאלתי… ולקחתי… “and I shall take you out…. And I shall save you…. and I shall redeem you… and I shall take you to me unto a nation” (Exodus 6:6-8), which are the basis for our Four Cups on Passover. And again, we wonder. We can easily understand the asthma patient metaphor, but here we’re talking about G-d! Why not just get the people out already? After all, they were in so much anguish and G-d can do anything!
Inspired by watching “Chatufim”, the Israeli TV drama that was bought in the U.S. and became Homeland, I realized the devastating pattern of enslavement.
Chatufim tells the story of three IDF soldiers who are kidnapped and kept in captivity for 17 years. The complex and highly recommended show, takes a serious look into the psychology of the kidnapped. It shows what happens to someone who is kept in isolation, beaten up (physically and emotionally) and yet, at the same time, fed and cared for. Each one of these three components is critical to the combination, and creates a complete dependency of the kidnapped to his capturers.
This pattern repeats itself in all abuse situations, from that of POW’s, to battered women, to the Children of Israel in Egypt. We’ll see it later, when the Children of Israel will “remember the fish, which we ate in Egypt for free; the cucumbers, and the melons, and the leeks, and the onions, and the garlic” (Number 11:5). Is their imagination running wild? Are they suffering from heat stroke? Or perhaps, not everything was bad in Egypt? Indeed, contrary to what we teach our kids and to the ridiculous drawings in various hagadot, Pharaoh was not all stupid, and we’re doing ourselves a great injustice for presenting him so. He was stoic, “divine”, inspiring, powerful. If things were simple,  slavery would not have been possible. Too much oppression ultimately begets escape, riots and revolts, or the death of captive, situations the oppressor usually want to avoid. It takes the right mixture of isolation (in this case away from their land; silence from their G-d), harsh labor and torture (as in the backbreaking work and killing of the baby boys,) as well as care (“free food” and a sense of safety, “job security”) to create the ultimate slavery.

When we see people in abuse situation, we often wonder: why doesn’t this person who is in so much pain, just walk out? If living in Egypt didn’t work anymore, why didn’t Jacob’s children travel the relatively short distance home, with the many caravans and merchants who passed by? Similarly, why didn’t the Jews of the 1930’s leave Europe? Why doesn’t the battered woman walk out on her abuser? Why doesn’t our hero in Chatufim cross the border, not even a few kilometers away, even though there are times he can? Why don’t we free ourselves from what’s holding us down internally?
Because from where we stand during these moments, it’s not possible. The successful captor knows it. The successful redeemer must know it too. The carefully constructed web designed to keep one in, must be carefully undone to ensure a complete and safe journey out.
Hayim Sabato in his book “Ahavat Torah” points out that the “Four Expressions of Salvation”, G-d’s plan which He shares with Moses, appear in three verses. Which correspond to the three elements that hold one in (galut, avdut, & inui – exile, slavery and torture), and parallel the three elements needed in the Jewish People’s redemption: The Exodus, the Covenant at Sinai, and the journey to the Land of Israel. These further parallel to the three “regalim”, our holidays that celebrate that journey, Pesach, Shavuot and Sukkot. The journey takes a detailed plan in order to be successful. Yes, it takes a “long breath”.
Likewise, when encountering enslavement, from within or without, maybe we shouldn’t judge too quickly. Even G-d takes time when delivering a band of slaves from their oppressor. We too, have to be patient with the journey ahead.
Shabbat Shalom! 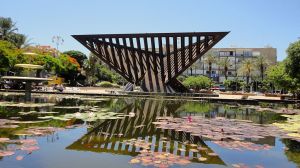