Leaving NYC in the height of its first seasonal snowstorm, we land in Oakland CA, where the sky is a hazy pinkish-white with air quality ranking “the worst in the world”. There’s a strong recommendation not to leave indoor spaces, especially not to “stam” walk outside; my friends ask for masks from NY because most hardware stores in NorCal are out; residents evacuate for the Sierra Foothills, Lake Tahoe and coastal areas. I sit and write about other people’s journeys and mishaps along the way.

Biblical Yaakov (Jacob) escapes from his brother who wants to kill him. What does it mean? Sure, Esau is angry, but kill his brother?? Jacob has taken what Esau has sold him earlier!! Wanting Jacob dead is perhaps symbolic of not accepting an either-or; not a world in which we’ll both live, even if different from each other, but a one way, “only I” solution. This scenario of a farmer, a man of the filed, fighting with his shepherd brother to death, should look familiar, and we’ll see another version of it in the stand-off between Joseph and his brothers. Luckily this time, we are open to a different solution.

Jacob leaves Be’er Sheva for Haran, and on the way, “hits the place” where he sleeps an sees a ladder, although the word “sulam” doesn’t appear anywhere else in the Torah and we can only imagine it from the text. It’s a thing that connects while not being grounded in either places, as indicated by the words “artza” and “shamayma”, “towards earth” and “towards heaven”, but not quite “there” in either one. It implies the need to “jump”, someplace along the way from one to the other, like squirrels who swing among the tree branches. Jacob has two names, which he continues to use interchangeably throughout his life; he marries two wives; and is able to live in two worlds, being our first forefather who opts to move to the galut, diaspora, then back to the Land of Israel. Yet, he’s the only one to have all his children become “The Children of Israel”.
At the end of this week’s Torah portion, he makes a covenant with Lavan, symbolic of the first time he does so, as a nation with another nation. Lavan, whose name means “white”, bidding farewell to Jacob just before the red sun will rise on him again, calls the place “Yegar Sahaduta”, in its Aramaic name, while Jacob calls is Gal’ed, in Hebrew. This might be parallel to the Pesach Hagada, which likewise we begin in Aramaic (“ha lachma anya” – הא לחמא עניא) and end in Hebrew (“Le’shana habaa bYirushalayim!” – לשנה הבאה בירושלים). The transition between Aramaic and Hebrew stands for the transition between exile-living and redemption גולה – גאולה. The ability to switch between languages is an expression of the ability to live in more than one world. This all might be reminiscent of Eliezer Ben Yehuda, and those who revived the Hebrew language around the same time that the recent galut began to end. This is Jacob, and this is his gift to us too. We too are invited day how to live – and thrive – in more than one world. 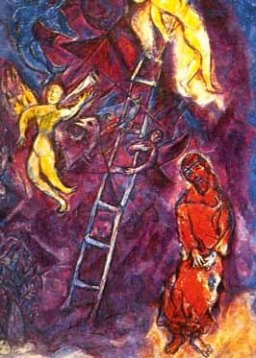