“From Victims to Victors”: a moving Yom Hasho’a visit

Yom HaSho’a in NYC: subways and traffic jams; people rushing, jogging, zigzagging to their errands, their work, their home; pretty stores flash their goods; passersby and store-keepers half nod a hi, welcome, have a nice day, and as if on automatic pilot, I nod back. The only sirens – a lone ambulance or police car, here and gone. I walk in the streets mindlessly, the mixed-up undecided weather – cloudy, sunny, drizzly all at once – reflecting my feelings.

Having grown up in a country which on this day stands still, flag lowered, radio music switched in all channels, ceremonies everywhere, the voice of the new reporter solemn, the day is etched in my soul. What to do with it here? How to hold it? For years, I’ve organized, wrote, announced, spoke, sought speakers, arranged the music, practiced with the children, made sure others came…. This year I pause to look what’s around. There are several respectful gatherings, ceremonies, stories by survivors and their offspring; there are photos and movies, names and violin music; The “Bayit” in Riverdale puts together an admirable and should be duplicated Yom HaSho’a seder, predicated on the Pesach Haggadah and initiated by Rav Avi Weiss. But all in all, one must seek these things out; they can be easily missed.

I thought it was a struggle to deal with the Holocaust in Israel – the silence of the survivors and those around them, the “diagnosis” of the 2nd and now 3rd generations, the burden, the guilt, the pain, the joy of making it through, the faith and its loss, the silence (did I mention it?), the loud sound of quiet, of those of won’t speak, those who won’t ask and hear… and yet, slowly, I realize the complexities of dealing with the Holocaust and its “Day” from abroad. I wonder, how close do we actually dare get, living in a “land not ours”?

Perhaps this is why I am especially appreciative that my yeshiva organizes a visit to the home of Ted Comet. Ted, a native of Cleveland, Ohio and a graduate of Yeshiva University, has been a key player in Jewish communal affairs since the end of World War II, working to meet the needs of Israel and world Jewry. In his career he held several major positions including, to name a few (hold your breath-) Associate Executive Vice President of JDC, Executive Vice President of the World Council of Jewish Communal Service, longtime Assistant Director of the Council of Jewish Federations and the National Director of the American Zionist Youth Foundation, as well as founder/chairman of the Israel Parade on 5th Avenue and producer Israel folk dance festivals (!) at Carnegie Hall and the World’s Fair.

But our visit’s focus is his wife’s art work, a survivor who chose to deal with her trauma first through weaving, and then through helping others in deep, meaningful psychotherapy. We stand in awe in front of the impressive tapestry, thinking and feeling  the pain, not only of those who perished, the immense, immeasurable loss for the Jewish people which we haven’t yet recovered, but of the pain of the living and the struggle we all share, in her words, “to turn the victims to victors”.

We often hear the words, “never again”, then watch in honor the recent shootings in Pittsburgh and outside of San Diego; the swastikas on walls, the marches in Germany, the yelling elsewhere, and we wonder, didn’t we just say, “never again”?? Do these words even mean anything??

For some reason, I am reminded of another Yom HaSho’a long ago and far away: while the ceremony was going on inside, outside a demonstration ensued. When I approached their leader, he barked at me, ‘You Jews, always whining about your people and what the Nazis did to you, he said mockingly, what about everyone else who suffered’? I told him that I agree with him; that I’m really sorry for his and everyone’s else pain, and that I wish the whole world would stop, if only for one day, to remember and cry together. I don’t know if my words had any impact or they just got tired or their permit expired, but before too long, they were gone.

I left Ted’s home thinking, maybe I’ll buy a loom… maybe just start there and see where it goes. 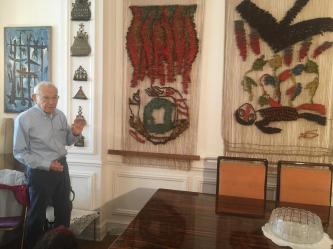