Thanksgiving in Israel and more – the Torah portion of Toldot

In about one month we’ll celebrate an event that happens once every 71/2 years: Daf Yomi will come to the end of its current cycle, and, as with the Torah, a new one will begin. Daf Yomi, literally “a daily page” refers to a daily routine of learning one of the 2,711 pages of the Babylonian Talmud in sequence. Over 71/2 years one can, in this way, complete the whole Talmud.

The originator of the idea, Rabbi Moshe Menachem Mendel Spivak, born in 1880 to a family of Chasidim in a town near Warsaw, presented it already in December 1920. In 1923 it was accepted at the First World Congress of Agudath Israel. Initially it was intended only for yeshiva students and scholars, who focus on certain tractates and miss many others, as an encouragement to go through the whole Talmud at least once. Since, it has spread. Tens of thousands of Jews worldwide study in the Daf Yomi program, and over 300,000 participate in the Siyum HaShas, an event celebrating the culmination of the cycle of learning. The Daf Yomi programs have made Talmud study accessible to everyone, adding a unique unifying factor. During that Congress, Rabbi Shapiro, who is credited as its chief promoter, said (and you can hear the accent):

What a great thing! A Jew travels by boat and takes gemara Berachot under his arm. He travels for 15 days from Eretz Yisrael to America, and each day he learns the daf. When he arrives in America, he enters a beis medrash in New York and finds Jews learning the very same daf that he studied on that day, and he gladly joins them. Another Jew leaves the States and travels to Brazil or Japan, and he first goes to the beis medrash, where he finds everyone learning the same daf that he himself learned that day. Could there be greater unity of hearts than this?

Daf Yomi can be studied alone, with a chavruta (study partner), in a daily shiur (class) led by a rabbi or teacher, via a telephone shiur, CD-ROM, or audio and online resources. Classes are held in synagogues, yeshivas, and offices. They also take place in the United States Senate, Wall Street board rooms, and on the Long Island Rail Road, in the last car of two commuter trains departing Far Rockaway at 7:51 am and 8:15 am, respectively, for Manhattan. On my last flight to the U.S., I found the voice of my favorite Daf Yomi teacher, piped into the in-flight sound system.

Daf Yomi is not easy. Quite often my jaw drops as I listen to challenging Talmudic concepts which are hard to understand and absorb. For example, this past week, we find (Nidah 35:a): “And here they [the rabbis] disagree with regard to whether one interprets instances of the word “et” in a verse”. The topic itself doesn’t matter so much and is a bit disgusting. We’re talking about a variety of bodily discharges. In an effort to understand what is included and what are the consequences for coming in contact with them, the sages try to figure out which words in the sentence should we pay attention to. This gets complicated because in Hebrew, before a known direct object, we have a little word – et. It seems to serve no purpose short of grammatical confusion, but for some of the rabbis, since every letter and every word matter, there can’t be anything “useless”, and the “et’s” might mean something. Nowadays, we no longer deal with all the bodily discharges they did; we have no temple, no offerings, and no sacrifices. But we still wonder, to what resolution do we dive during a dialog? When I add a “seemingly useless word’, or the primeminister does, do we view it the same way? What weight do we give to “small, insignificant” things? That we do? That others do to us? When studying, I worry less about the discharges (for example) and rather, think of it as learning the language my people think. Slowly, a door opens and I’m home.

Thanksgiving in Israel? There are rumors that somewhere there is an area of “Americans” –  Jerusalem, Ra’anana etc, they meet to have a festive dinner which coincides with the “4th Thursday of November”. Otherwise, largely no one heard about it. I’m “ok” with it. After all, I’m busy here, and at times, still pinch myself in disbelief. I’m actually here, and therefore, make no special plans. As my kids remind me, leaning vegan and vegetarian, we don’t have a tradition of “turkey”, and yet, there’s something: a lazy morning, a meal, togetherness, on the backdrop of a brisk fall day, maybe first snow on nearby mountains, and time to travel in the beautiful outdoors. And then it hits me.

Being in Israel, one is robbed of something incredibly Jewish, perhaps even incredible essential and needed, something one has everywhere else (Jewishly speaking), and that is, Longing. But once one’s kitchen sink is here, the ability to “long” for somewhere, to miss, to wish for that “wow” promised land which is elsewhere, far away, wrapped in memory and hope, is — gone. Is it possible to long for the longing? Then there’s Thanksgiving, a day when it’s “legal” to miss another place, and what a relief, it’s still possible to feel.

Twins are born to us this week in the Torah portion of Toldot. Yitzchak loves Esau, and Rivkah – loves Yaakov. Esau’s name shares its letters with “asui” – עשוי = עשיו, complete, done, in a sense of – what you see is what you get. Yaakov’s name comes from follower, also crooked (והיה העקב למישור). Yitzchak loves Esau “for there’s hunting in his mouth” (Genesis 25:28).

Esau is worldly and capable, often called the “gadol”, the big one. Rivkah loves Yaakov, “the little one” for no obviously stated reason, Yet. Yaakov is smooth, as if “not done”, implying the need to grow, to move from “crooked” to “straight” (yashar – like yis’ra-el), and at times to be able to hold both. In all that, Rivkah “gets it”. She therefore brings a new dimension which Yitzchak, the boy almost sacrificed and now blind, does not have and so badly needs: not only her endless kindness and boldness, but a daring belief in the unknown, the hidden, the potential; an ability to see – and believe- in the “future”.

Shabbat Shalom & best wishes for the upcoming month of Hanu-Kislev. 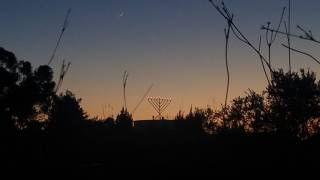