Taste of Daf: Brachot 6a

Jerusalem, Sunday, Jan 5, 2020 – 8th of Tevet, 5780 – the end of the 13th cycle of daf yomi and immediate beginning of the 14th one, to end on June 7th, 2027. The Jewish world is celebrating, and it should. The fact that an obscure idea, which was meant to help exceptional yeshiva students in Eastern Europe of almost 100 years ago took over and inspired thousands – some say as many as 300 or 500 thousands (!) the world over, is almost as surprising as other facts from about 100 years ago, like those of another European, a “delusional” modern and progressive journalist, that one day, “in 5 or at most 50 years at most” (to paraphrase Hertzel from his famous book Altneuland), the Jews will have their own state. Not only in MetLife Stadium, Brooklyn Teaneck, Bnai Brak and Me’a She’arim, Talmud study is starting to be “in” which is almost as miraculous as establishing the State of Israel, where not only our physical existence took a leap but the spiritual one as well.

On that Sunday, one after the other, leading “rabbaniyot” / rebetzens – not only “wives of”, but “masters (madam?) of Torah” in their own right, got on stage to share deep, meaningful, knowledgeable words of Torah. I had the good fortune and incredible honor to be there, at the first, public, women’s “Siyum HaShas”  finale of daf yomi cycle marking, especially, women’s learners, an event that not that many years ago would have been unheard of and unthinkable. There was a time when Gemara and women were two very separate things. It’s no longer the case.

So, in that spirit, this blog is going to attempt and offer something new; something I’ve dabbling, teaching in the past and planning to continue: a weekly “taste of daf” (The “daf” is a two sided Gemara page). In lieu of Torah portion drash (there are so many already posted in this blog from the past 7 years 2013-2019), there will be a little something, an appetizer, from this weeks’ global Talmud learning, and, of course, no previous background required. SO, let’s start!

The good news – we are in the beginning. The “bad” news – there is no beginning! The beginning is a direct continuation for what came before it, i.e. the Torah. There won’t be any introductions, any explanations. The assumption is, we’ve been here and we know what’s going on. Another important note: we look like we’re discussing halacha, Jewish Law, but were really talking about all sorts of life things, seemingly small and minutia, and at the same time, big picture and huge. And: this book didn’t pass the American movie rating system, so brace yourself. There’s no warning as we shift abruptly between themes, drawing our examples from wherever they make sense to us, and yes, despite titles, this was compiled by association, not strictly by topic. We might be talking about vows, which reminds us we need to address vows between husband and wife, which means we’ll be talking about sex. We might be talking about different types of blood and can’t think of any better example for their colors other than the soils of the different valleys in the Galil when flooded in the winter months. Yes, we may reside in Babylon for a few hundred years, but we live – in the Land of Israel. And did you see the giraffe?? There was no giraffe you say?? Well…

Here is our taste for this week, from Brachot 6:a (with help from Sefaria):

It was taught in a baraita that Abba Binyamin said: One’s prayer is only fully heard in a synagogue, as it is stated with regard to King Solomon’s prayer in the Temple: “Yet have You turned toward the prayer of Your servant and to his supplication, Lord my God, to listen to the song and the prayer which Your servant prays before You on this day” (I Kings 8:28). In a place of song, there prayer should be.

The teaching tells us that one’s prayer is heard – only ? better? – at the synagogue. This can be based on two things, not mutually exclusive: the one is, possibly imagining the energy that was in Temple, of which the synagogue is a smaller model (and the home, a further mini version). After all, the Temple no longer stood when this was written, and those who wrote this never saw the actual Temple and wanted to keep its memory. Along with that, my community organizing mind wonders if perhaps (2) they had some of the same challenges some of our shuls do, and because of low attendance, needed to “advertise” synagogue services as the place where G-d is, so as to draw people in. This must have been especially so in the growing Diaspora, in a time of great transition, moving from one central Temple to many synagogues all over the world, which solved one problem (what do we do with no Temple and how do we keep us as one people??) and introduced another (how are we going to make sure we maintain a united and uniting prayer service across the world??).

I happen to like shul, and I like lively, harmonious singing at shul so I’m good with prayer being song, but as I read this, I wondered about this going the other way around. Maybe, this is not only about shul and prayer “service” but what is also said is that song in itself, is a form of prayer. 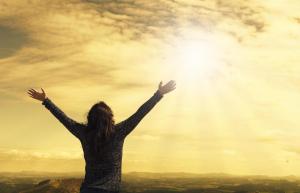 1 Response to Taste of Daf: Brachot 6a