Heading out: on the need to journey

Why did Jacob leave his parents’ home for Haran?
Of course, we “know”: he had to run away from Esau, his brother, who was going to kill him for stealing his blessing. But then, there are so many places he could go. Even the ancient midrash tells us that Jacob did not go directly, but stopped at a yeshiva – an intense study place – of back then for 14 years. What?! That sounds fantastical! A yeshiva? back then?? But the writers of the midrash might want to tell us something. One, that he was learned and seeped in spirituality, and the other, that there were other places where he could be safe. Indeed, this portion is called Vayetze -“and he went out” rather than Vayivrach, “and he escaped”, implying, a deliberate departure. Yet, he opted to go much further and to a very different place from his childhood home.
So maybe he had to travel so far north in order to get himself a wife? But then, he too could have sent a messenger, like his grandfather did when it was time to marry his father to his mother, especially since it’s not like he is looking to marry a stranger. Chances are, someone could have brought him the right woman, and do so with much less trouble than he’s gotten himself into.
So why go?
One of our earliest descriptions of Jacob (Genesis 25:27) is that he is “ish tam” – a totally dedicated man (Rav Hirsch’s translation); a quiet man (Mechon Mamre), wholesome (the Stone Chumash). Jacob is not restless, not running around in the field seeking game. He dwells in the tent (yoshev, as in “sitting”, being stable). He is wholehearted, complete. At a young age, he’s reached life’s goal of peace and tranquility, like a noble yogi. From here on, life should have been coasting for him.
But, it’s no big deal to be “complete” in Isaac and Rebecca’s home where it’s comfortable and spiritual and loving, and life starts agitating him, pushing him out of the “womb” again to continue to grow.
He is forced to leave that place where everything is “perfect” for him, and go; go live with a person who is deceitful, greedy, manipulative and evil, and still, not a far away enemy but part of the family, as if emphasizing that all these qualities are not somewhere “else” far away but right at home, within. Jacob has to face this other world, learn to be “in it but not of it”; he has to learn to find G-d in everything, everywhere. Only then, he is ready to go back. Only then, he will become Yisra’el, the one who struggles with (hu)man and G-d and prevails. And by the way, “prevail” won’t mean he had an easy, pleasureful, painless life with everything going his way. He didn’t win the lottery; he worked hard against all odds. When he thought he’s on route home, his beloved wife died, and when he was about to rest, his favorite son disappeared. “Prevail” means that through his struggles, the ups and downs, he ultimately lives closer to G-d. And at the end, he is also the only one whose children (all of them) become known as “the Children of Israel” to this very day.
My mom used to say that in her past life she must have been a gypsy, since she traveled so much. Living on the other side of the world, I can obviously relate. At this point, traveling to the “other side of the world” is one of my defining characteristics so I always thought it was “genetic”, but just recently found out that there is actually a gene that controls our wandering. Which made me wonder, considering the relatively high compliance with the tight laws of marriage in the Jewish community, is it possible that inadvertently, we’ve bred people prone to wandering, feeling “called” to journey?
I wonder (and wander-), what might be the implications of this? What does it mean to educate carriers of this gene? Is it really possible to tell them to “sit down and just listen”? What does it mean about the future of Israel? What does it mean to our own life goals?
Last but not least, Jacob journey begins with a famous dream about a ladder, a way to connect heaven and earth, with rungs. The journey is not smooth, nor speedy or direct. It takes time. We are invited to climb; we are likely to slip down too. Along the way, we might meet angels, there to help us in our journey, even those – or especially those – who challenge us and push our limits. They too. Because this is what it’s about: not the arrival but the “stuff” we meet along the way, not the “tomorrow” and “when are we going to get there”, but here and now. 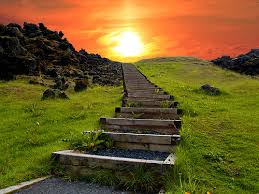 3 Responses to Heading out: on the need to journey