Building a Mishkan, here and now

“It’s especially poignant that we are here today, as this week’s Torah portion talks about the spirit of voluntarism, when it describes our People getting together to build the mishkan”. I’m at an outdoor amphitheater on a breezy Thursday evening as the sun is setting on the Judean Hills. The speaker is one of the IDF’s rabbis. The occasion: the swearing in of new soldiers into the Giv’ati infantry brigade. There are hundreds, maybe thousands of family members, relatives and friends around us, and about 500 soldiers on stage. One of them – you see, the tall, handsome one, in the back row, center stage?? That one is mine.

The tiny moon of early Adar is rising in the west as lights shine on the – still – massive Latrun fortress in back. Latrun is located at a strategic hilltop, just off Israel’s highway 1, overlooking the road between Tel Aviv and Jerusalem, exactly where the road narrows and goes up. It was the site of famous, fierce fighting during 1948, but that was not the first time war took place in this area. Judah Maccabee battled here with the Seleucid Greeks, who had invaded Israel/Judea and were camped nearby. In what is known as the “Battle of Emmaus”, using tactics which led the few to win against the many, he successfully advanced the people to a greater Jewish autonomy over that next century. And before then, Joshua defeated the Amorites (Joshua 10:1–11). Later yet, the Crusaders and Muslims fought over control here, as the need to guard the road to Jerusalem was always key.

But this beautiful area of hills and valleys was not only a place a war. In 1890 a monastery was established at Latrun by French, German and Flemish monks of the Trappists order. Currently nearby, is Mini-Israel. Vineyards and fruit trees of different kinds adorn the slopes all around, between them spring flowers bursting in gorgeous colors.

I love the view here, but this time, am much more involved with what’s happening on the stage. The next speaker now continues and quotes from the TaNaCh (Bible), reading Joshua 1:1: “Be strong and courageous”, said the leader of long ago – repeating these words three time within mere 9 verses, as if we didn’t catch it the first times. The topic then is inheriting the land, and yet the focus is – not letting go of the Torah “day and night” (1:8). As a mark of this “unthinkable contradiction, which only you can hold and can only exist in you”, per Giv’ati’s commander, each soldier is entrusted with his personal gun – and a TaNaCh. The crowd is asked to rise up for Hatikvah, singing in choked voices, watching the sky with glistening eyes. Indeed, we are a people of contradiction and that is who we are.

After it’s all over, the soldiers meet up with their families and friends. It’s all one big happening Israel style – uniforms and civilians; laughs and tears; guns and flowers and balloons. People are picnicking on the lawns around, one family even pulls out a small stove and cooks; others are offering each other pastries, pita, chumus and other goodies. No one is a stranger here tonight. The parking lot is completely jammed but almost no one honks, letting each other go ahead with a smile. There’s a sort of a magic: we’re building a mishkan together, each brining what s/he can volunteer and what s/he can, each according to his heart. The mishkan, might not have purple walls, a mysterious covering and wood beams anymore, no table, ark or golden menorah, but it is real and meaningful as ever. As we turn to leave, the bells of the monastery chime for us an evening prayer for peace. 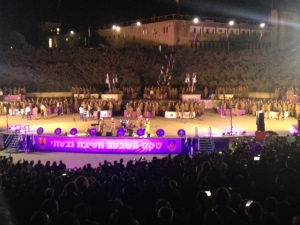 2 Responses to Building a Mishkan, here and now