I’m sitting between the embroidered pillows on the purple couch at my aunt’s sunny living room, my feet rubbing against the soft carpet, indoor plants shading us from the slowly accumulating spring heat. In front of me is the mahogany bookshelf, loaded with ancient manuscripts and new colored coffee table books, side by side: an edition of old prayer books, miraculously rescued from Germany; the history of the Haifa Refinery; where to hike on the weekend, Amos Oz. A delicate tea-set behind the glass cabinet doors. The chess pieces on the desk, ready to go, white pawn to e4.
Everything is immaculate, almost shiny. In spite of the stream of people, many of whom I’ve never met, some know more about me that I know about them, there’s not a speck of dirt on the glistening tile floor. Voices are mostly hushed, as my aunt, fumbling with an invisible thread on her light sweater, tells again and again about his last few days, the routine check-up, the surprising diagnosis, the rush, the sudden new realities: uncomfortable chairs to sleep in, bland meals at his bedside, raspy breathing at night. Then silence.
A silence that breeds new stories I haven’t heard before.
Shiva often invites conversations about family history, where we came from, what was it like, who looks like who, how are we all related, and remember when… Someone asks my aunt what I think is a stupid question: when did she and her family come to Israel. Stupid, because after all, I think I am so “good” with such information, easily recalling birthdays, astrological signs, immigration years, old phone numbers no one needs… I jump to reply, “1935”. Yekkes that we are, everyone I know in my immediate family left Germany well before the war. In Israel of the 60’s and 70’s, we were considered lucky. There was really not much more to talk about.
But my aunt gives me one of her looks. “1935”, she says slowly in her heavy accent, “is when we left Berlin. But that is not when we came to Israel”.
“So… 36”? I try to gain my footing.
“1949”, she says, lowering her gaze.
“What on…?”
“1935 is when we left for Holland”, she explains, looking away.
“Holland??” I am alarmed now, “that doesn’t sound so good!”
“Well, it wasn’t. Ah, but what am I blabbing here? Our story is boring. Anyone for more coffee? A slice of poppy seed cake perhaps? It’s delicious. Some fruit?” she gets up towards the kitchen.
I am 33 years old. My almost 18 months old baby is comfortably sleeping off her jet-lag in my lap, and I am finding out, for the first time in my life, that my aunt was in hiding in Amsterdam for years; that she decided not to leave her mom, thus refusing to join the risky escape plan her younger sister and seven others ventured on, heading to freedom in Switzerland through Belgium; that she had a brother who died elsewhere just before the war ended; they she and her mom were turned in, sent to Bergen Belzen, then to detention camps in North Africa; that when she arrived in Israel – with her mom – in 1949, she was the same 5’6’’ but barely 100lb; that she would never be able to have children of her own because of the experiments she was subject to in the camps.
I never knew.
Silence was the way so many survivors chose to deal with their pain.
Silence is also the way Aaron, the high priest, responds in this week’s Torah portion, Shmini, to his sons’ tragic death.
Our sages offer “reasons” to what happened to them: they were drunk, they were selfish, they were haughty, they just happened to be too close to the fire – and the more they struggle to find explanations, the more it’s obvious that we don’t know; that we can’t know. Because even if we agree that they were guilty on all these accounts, we would still be faced with the question, whether any of these – or all combine – deserve a zapping death penalty?
Aaron’s reaction is described in two words: Vayidom Aharon – “And Aaron was still” (Leviticus 10:3). Did he cry and Moses comforted him, thus he was still after the consolation? Did he know what his sons do wrong, maybe even warned them, thus he now knew there was nothing to say? Or was he in too much pain, everybody celebrating around him on that day the mishkan is finally dedicated, what should have been the happiest day of his life, while he watches his own children go up in smoke?
And that word, “vayidom”, expressing an inward silence, perhaps related to the word dam, blood, and perhaps similar to the English expression, “bloodcurdling” – horrified, mesmerized, unable to speak, as if his blood separated itself within him and froze, so great was the blow.
What is the “appropriate” response to tragedy?
Is there one?
Surrounded by Yom HaShoa and Yom HaZikaron, these are fair questions. As the “next generation” of the Holocaust, we were resentful. We wished we were told more. We wished we were explained. Why were they silent?? We, yesterday’s future, should not be treated like children who had no idea, and therefore should be “spared” the details. Or at least, so we wanted to think of ourselves, so we say now, slightly arrogantly, and in retrospect.
In reality, all we could do is accept the survivors’ silence with our own respectful silence, not a silence of forgetfulness or criticism or haughtiness, but one that is like a secret handshake of those who share in the same pain.
Shabbat Shalom. 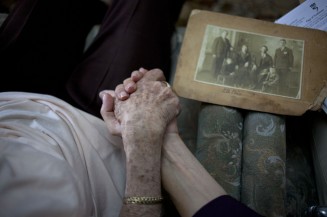 1 Response to In Silence